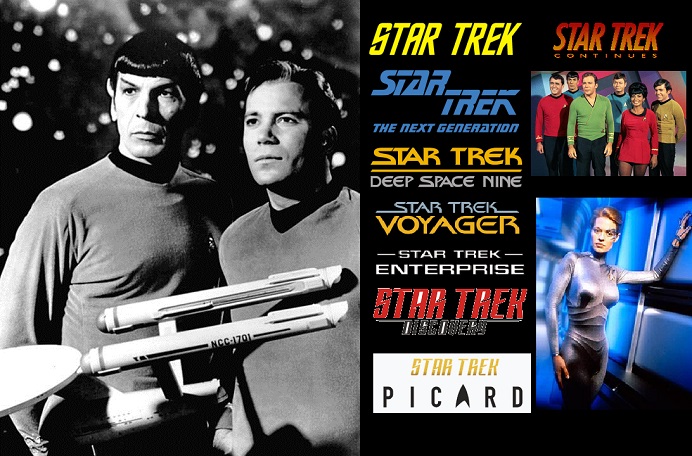 Gene Rodenberry’s Star Trek series really made a name for itself and earned the reputation that allowed for all of the other ST spinoffs. Any program that wants to carry on the Star Trek tradition should be worthy. It’s 2020 and my Star Trek lust is not being satiated. I viewed a few episodes in three different series that have the name Star Trek in the title and … in my humble opinion … they don’t live up to the name. Hey! It’s an opinion. Feel free to disagree. We all have our peculiar tastes when it comes to entertainment

First, let’s recap the Star Trek series being used as my basis for comparison.

The TV show aired back in the 60s (1966-69) and was considered groundbreaking because of its diverse cast, which included an African-America female high ranking officer, Lieutenant Uhura; and a Vulcan first officer, second only to the captain of the USS Enterprise, the logical and the incomparable Mr. Spock. Imagine. Before man had a mission to go where he had never boldly gone before, Vulcans had already boldly come to us. An advanced civilization had to come and give us ignorant humans a helping hand with our exploration efforts. It’s interesting. Considering that during our space explorations we found that there were so many other “sentient beings” in the universe, one may wonder why the Vulcans chose to ally with the humans and landed in the United States of America for their First Contact. That question is answered in another Star Trek series called Star Trek: Enterprise, which did not air until 2001 after several other ST spinoffs happened in between.

Star Trek: The Next Generation

The show ran from the late 80s into the early 90s (1987-1994). It will always be remembered for Captain Jean Luc Picard, he was very commanding and very wise; the android named Data, he was incredibly smart and very handy to have around; and an extremely scary enemy called … The Borg! Hey! Why fight them? “Resistance is futile”. So what! We fought them anyway!

This series began in 1995 and ended in 2001. Can you believe it? They got stranded in outer space, in the wrong quadrant, and the entire series was about them trying to find their way back home and get home before they were too old for their relatives to still recognize them. So get this! A 24th-century state of the art starship with no GPS to give them directions when they’re lost. It’s believable. Sometimes we humans are very creative and inventive but in the process of building things, we overlook an obvious and critically important feature. Who was the scariest enemy? The Vidians. These beings were suffering from a disease so they went everywhere stealing organs from everybody else. They didn’t ask for organ donors. They just took what they needed. What must it feel like to have your lungs disappear? One second you’re breathing. The next second? NO AIR!! Who is the most memorable character in this series? Seven of Nine. She was a Borg drone, who was captured by The Borg when she was a child. By the time she was found by the crew of The Voyager, she was a young woman. Captain Janeway was determined to give her back her life so that she could live as a human again. She succeeded. Out of all of the characters in all of the Star Trek series, I am never going to forget Seven of Nine.

This series is the prequel. Star Trek: The Original Series began without ever explaining how the United Federation of Planets began. It ran from 2001 and 2005 and honestly, nothing about the show was memorable. But it did explain how and why it was decided that we should boldly go where no man had ever gone before. Even if we do cross paths with sentient beings who think they are a superior race or just don’t really like us very much and want to fight a war. If you think about it, it’s really not that much different from living on planet earth.

I watched only one episode beecause it was offered free of charge for the curious who might be willing to pay to watch the entire series. It was OK. To be henst, since it bore the name “Picard”, I had higher expectations. I’m content to wait until I can binge watch all of the episodes for free at some later date when its novelty has word off.

I watched some episodes and I have several complaints.

This series was launched in 2017. By this time, the original Star Trek series was 50 years old.

I was searching for streaming apps and stumbled across this series. You will recall that the mission was supposed to last for 5 years, only the show was canceled after 3 seasons. Somebody decided that since the original Star Trek series was cut short and fans were terribly disappointed, they would continue the old show only … with new actors playing the old parts for Captain Kirk, Mr. Spock, Bones, Scotty, etc.

♦ All I can say is… once upon a time … there was an awesome TV show called Star Trek that set the standard for all the other science fiction space exploration television series that would come after.

One thought on “Come With Me on My Star Trek Adventures”