Ever Go Fishing in the Florida Keys? 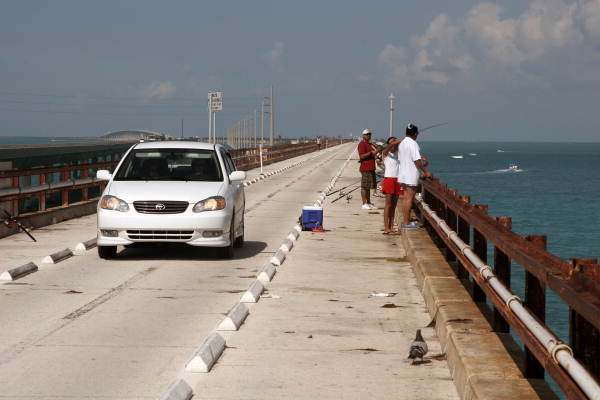 Do you know how many different species of fish there are? No? It’s cool. I don’t really know either. But I do know that my late husband really enjoyed saltwater fishing. He said he didn’t care too much for freshwater fish. Since I didn’t really know that much about fish, one way or the other, I figured it was just his personal preference. Fish is fish. What’s the big difference? You make the same dish whether the fish is from freshwater or saltwater. Right? Wrong!

Anderson Witherell is the Director of Marketing at a business called The Fish Guys, Inc. According to Mr. Witherell, the Americans are not actually much of a fish eater, therefore, American people do not know much about fish. “Everyone has his or her own preference about eating or not eating fish,” he says.

Well, my husband was from The Bahamas and Bahamians know their fish. I am American and had never noticed before but one time my husband went fishing with a friend. Instead of driving to the Florida Keys where my husband did most of his fishing, his friend took him to another fishing spot. As was his custom, my husband came home with his catch, he cleaned them, and prepared them for our dinner. I was shocked! I asked my husband where did he go fishing and why did the fish taste so different from the fish he usually brings home? He remarked, “Oh this is freshwater fish!” There was a definite difference in the taste; and saltwater fish is a lot tastier, in my opinion. So even though I may not know how many different species of fish there are, my palette can surely make the distinction between saltwater and freshwater fish.

When we moved from Florida to other cities in the United States (Damascus and Gaithersburg, Maryland; El Paso and Austin, Texas), my husband could not easily go fishing any more. We had to buy whatever was available at the local grocery store. It’s not that the store didn’t sell saltwater fish. The selection was pretty good. But the fish was so expensive! From that point forward, we didn’t eat fish for dinner very often. Nowadays I buy frozen tilapia. The fish filets come is individual vacuum sealed bags. You just take a couple out of the freezer and prepare a quick meal for yourself. It’s nourishing and filling but I really do miss the catches my husband used to bring home.

Most of the time my husband brought home red snappers, yellow jacks, grouper, and trout. Key West and the Florida Keys are known for the abundance of fish and the variety is amazing. There is tarpon, sharks, barracuda, mackerel, wahoo, and mahi-mahi just to name a few more. Many people either owned their own boat or they would charter a boat to go fishing. We couldn’t afford either so my husband would fish off the Seven Mile Bridge. Let me share a little history with you about this bridge. I’ll start by telling you there’s the old bridge and then there’s the modern bridge which is the longest bridge in the Florida Keys that has been standing since 1982. But it’s old bridge that has all of the interesting history and that’s the bridge where my husband used to go.

While you’re driving on the new bridge you can see the remains of the old bridge. This bridge was built by a wealthy businessman named Henry Morrison Flagler. People told him he couldn’t do it. But he did it! It’s was a marvelous feat of engineering. People labeled the bridge the “Eighth Wonder of the World’’. People are so easily impressed. Mother Nature, on the other hand, is not! Labor Day 1935, an unnamed Category 5 hurricane, one of the most powerful hurricanes to ever hit the United States at that time, struck the Florida Keys, Key West, and Miami, Florida. (NOTE: I say “at that time” because several named hurricanes such as Camille, Gilbert, Wilma, and Andrew have come after.) But when the Labor Day Hurricane of 1935 hit, it was … Bye Bye bridge! The bridge was destroyed along with several other manmade structures. After the hurricane, the Old Seven Mile Bridge started being used by pelicans and great blue herons for perching and by humans for fishing. There are plans to restore this bridge and the project completion date is set for December 2021.

Have you ever gone fishing in the Florida Keys? Perhaps now that you know this interesting history, when you do go, you’ll appreciate and enjoy the fish you catch even more.

One thought on “Ever Go Fishing in the Florida Keys?”